This “States of Being” series focused on the 50 stars/states is part of my larger project to push the symbolic potential of the American flag’s structure.

“States of Being” I: Black

In the stars, the “50 states of black” stars represent diversity within the African-American community, including myself a mixed-race African-American woman, and our presence across all states in the US. This is one visual element taken from my Reimagined American Flag series: “Black Lives Matter!” 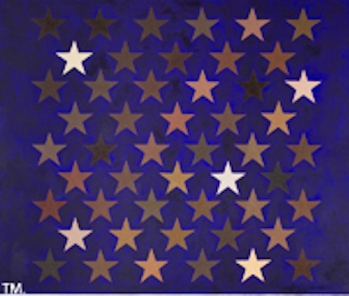 “States of Being” II: Diverse

If I had colored in the stars in my original “All Lives Matter” flag, I would have expressed the ethnic and multi-national diversity of the US with multiple-colored stars as in this piece: “states of being” diverse. This piece is currently being exhibited at the US Embassy in Zagreb, Croatia. See artist’s webpage for the US State Department’s Art in Embassies Program. 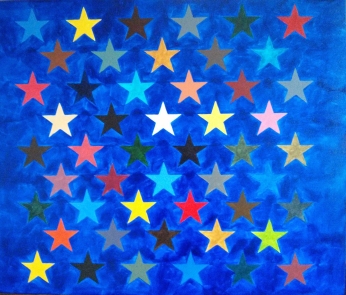 “States of Being” III: Life or Death?

In the stars, “50 states of red” represent the pain, suffering and grief as well as anger, rage, and despair people experience having lost loved ones to gun violence. This is one visual element taken from my original Reimagined American Flag series: “Don’t Lives Matter?” 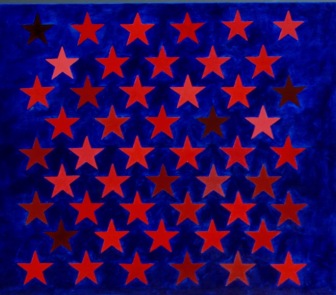 LGBTQ “States of Being” IV: LGBTQ

Inspired by the original colors of the 8-striped Rainbow flag these 50 stars are painted in various hues to represent the diversity within the LGBTQ community, including myself, as well as makes a statement about our presence throughout all 50 US states. The three pink stars of the same hue in the upper left-hand corner represent the pink triangle that gay prisoners were forced to wear in the concentration camps during the Holocaust.

“States of Being” V: Love or Hate?

Made of 25 of 50 possible stars this “heart” reflects our divided nation and encourages Love & Compassion in the US as a “state of being.” 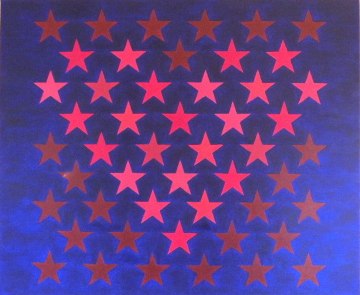 “States of Being” VI: Peace or Acquiescence?

Made of 26 of 50 possible stars this piece on peace reflects our divided nation and encourages peace in the US as a “state of being.”

“States of Being” VII: Women in the USA Unite!

This painting uses the Venus symbol to depict two women holding hands symbolically through the 50 stars of the American flag: the one on the left in Democratic blue and the one on the right in Republican red join forces to fight for maintaining the principal that “Women’s rights are human rights.

“States of Being” VIII: SOS 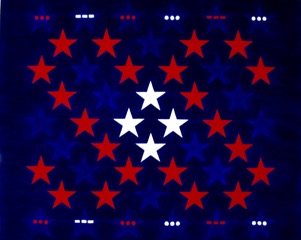